Thanks to our ancestors, we know which mushrooms to eat, which to avoid, and which to respect for their mind-altering powers. Yet aside from gastrointestinal and psychological considerations, mushrooms have for centuries been used by our ancestors for countless other purposes like medicine, instruments, toys, ornaments, sacred symbols of protection and power, spiritual guides, tinder, and dyes.

How do we know all this?

One of the most amazing books on ethnomycology is Puppoweeh for The People by the indigenous ethnobiologist Keewaydinoquay Peschel. Within the book’s pages, Peschel details some of the ways the Anishinaabeg, indigenous peoples who inhabit the Great Lakes area of the United States and Canada, used mushrooms.

It was through Peschel’s beautiful stories of how mushrooms were used by her people and herself that I first came to learn about the use of mushrooms to smoke beehives when harvesting honey. From a few experiences, I knew it was common among beekeepers to use smoke to calm bees during hive inspections and harvests of honey, the smoke acting as a sort of masking agent to cover the pheromones that bees release when they feel threatened and want to alert the rest of the hive. But I had never heard of burning mushrooms and using the resultant smoke for this practice.

One amazing account Peschel’s book details is what a day of harvesting honey looked like in her village. Peschel writes how her grandfather would use the smoke from a burning Fomes igniarius and an ignited Fomes fomentarius. The smoke from these mushrooms, according to Peschel’s grandfather, was pleasing and calming to the bees.

Peschel’s grandfather would then talk to the bees, thanking them and asking for permission to harvest the honey. When it was finally time to harvest, Peschel writes how Puffball mushrooms impaled on sticks were put around the hive and ignited. As the smoke from these burning mushrooms wafted into the hive, the bees were effectively anesthetized, making it safe for her grandfather to open the beehive and harvest the honey, yet always leaving some honey for the bees themselves. (1)

From past ethnomycology research, I’ve known that fungi are helping bees and beekeepers in today’s world. For example, Paul Stamets (2) has been using the extract of polypore mushrooms (including Ganoderma and Fomes species) to improve honey bees’ immune defenses against the deformed wing virus that is contributing to colony collapse disorder. But to learn that some indigenous cultures used mushrooms to tend bees generations ago, it all created a spark inside me to dive deeper into this ethnomycological practice.

Who else in the world could have been using mushrooms to harvest honey, I wondered?

Studying fermentation and natural health foods, I’ve known for some time the importance of honey for humanity, be it for their medicinal properties or, according to Stephen Buhner (1998), as one of our ancestors’ most important sources of sugar for fermentation. According to archaeological evidence, mead is said to be the first fermentation made by humankind (3).

Next, my mind visualized the famous painting of the “Bee Man Shaman,” an approximately 10,000 year old cave painting found in the Sahara desert depicting a human shaped figure with a bee face, holding and surrounded by mushrooms. Some researchers and ethnomycologists hypothesize that this painting is related to the use of psychedelic mushrooms, even claiming that it’s the oldest image related to our ancestral use of psychedelic mushrooms (4).

But after diving into this ethnomycology topic deeper, I realized little to nothing about bees was mentioned in these hypotheses. Have we only scratched the surface of the ethnomycology and peoples who created these paintings? Could the paintings be related to the use of mushrooms for tending bees, but no one had yet thought to ask? And who were the people who drew such intriguing images?

While I do believe in the possibility that these people and some of our other ancestors may have used psychedelic mushrooms, could the Bee Man represent something else, or something more? Could the bee mask also relate to the use of mushrooms in tending bees? And what mushrooms could they be using?

Many of my ethnomycology questions were answered by looking at hundreds of images on the amazing website roundheadsahara.com, where photos of the famous Round Head paintings are detailed (5). To our best knowledge, the creators of the Round Head depictions were a hunter-gatherer society that lived about 10,000 years ago in what is now the mountains of South Algeria, South Libya, North Niger and North Chad.

The rock art of this time depicts mostly human ﬁgures, with very round heads, hence their given name, sometimes with bows and often with body decorations and masks. There are also paintings of wild animals such as mouﬂons, antelopes, elephants and giraffes (6).

Many are the mysteries that surround the Round Head paintings. At around 7,500 BC, they ceased being made and a more recent prehistoric rock-art style, termed the Pastoral style, appeared. These Pastoral paintings were the work of new nomadic populations that arrived to the Sahara later than their Round Head predecessors. According to Jitka Soukopova (6), there are striking similarities between the Round Head paintings and the San rock art of Southern Africa, indicating that these people may have later migrated to other places on the continent.

Which begs the question, are there indications of indigenous peoples on the African continent who still use mushrooms to harvest honey?

Finding an answer in a place as large and diverse as Africa, with many of the indigenous cultures now lost, is a difficult task. Yet there are some promising leads.

In an article by Wood (7), the chemical compounds within African puffballs (Lycoperdon wahlbergi) that might cause the anesthetizing effect on bees when burned is investigated. Wood cites how the anaesthetization of honeybees by burning puffballs has been described by many authors around the world. Through a personal communication with Corner, he learned about the anaesthetization of tropical African honeybees by beekeepers in the Meru Crater in Tanzania, East Africa. In that case, the beekeepers used a smoking puffball, L. wahlbergii, when taking honey from a hive.

According to him, “this smoke caused the bees to regurgitate the contents of the honey sac, and to cease moving. After about 20 minutes the bees revived, and later they began to work normally.” Definitely a fascinating ethnomycology account.

Tibuhwa (8) tells us that the Maasai community, who inhabit the Eastern part of the Ngorongoro and Serengeti National Park, Tanzania, Africa, traditionally never eat mushrooms. However, a survey of the community found that 28% of the study’s participants reported using the spores of the Earthstar mushrooms (a relative of Puffballs with very similar characteristics and properties) Geastrum triplex and Geastrum saccutum—referring to them as ‘soots’—to anesthetize the bees during honey harvesting. Further, 75% of the respondents reported that they do so frequently. In this process, the spores of Earthstar mushrooms, when dry and mature, are directly opened into the beehives. Once the spores come into contact with the bees, the bees fall unconscious for about 30 minutes, allowing the honey harvester to complete their task safely.

I’ve come to conclude that Puffballs and Earthstars have been used all around the world by different peoples and cultures for thousands of years. In fact, ethnomycological investigations have undiscovered a wide variety of uses for these mushrooms, many of them medicinal, but also for games and, as I’ve detailed here, beekeeping.

These are the types of ethnomycology investigations we need to continue, and the ancestral knowledge that comes from them we need to protect, preserve, and spread. In the case of using mushrooms to smoke beehives, this practice is a sustainable and safe management technique that can be applied by honey producers of all sizes in operations rooted in an agroecology, permaculture and/or biodynamic farming ethos. But this story isn’t mine. It’s one I like to believe the “Bee Man Shaman” is trying to tell so that its descendants would know and remember a safe way of harvesting that oh so sweet and precious liquid we love and depend on so much, honey, with a little help from our fungal friends.

Mariana is an ethnomycologist, agroecologist, herbalist and wild fermentation expert. From Brasil, she is an Indigenous person that focuses on preserving and restoring endangered ecosystems and the traditional ecological knowledge of Indigenous peoples, traditional societies and local communities around the world. 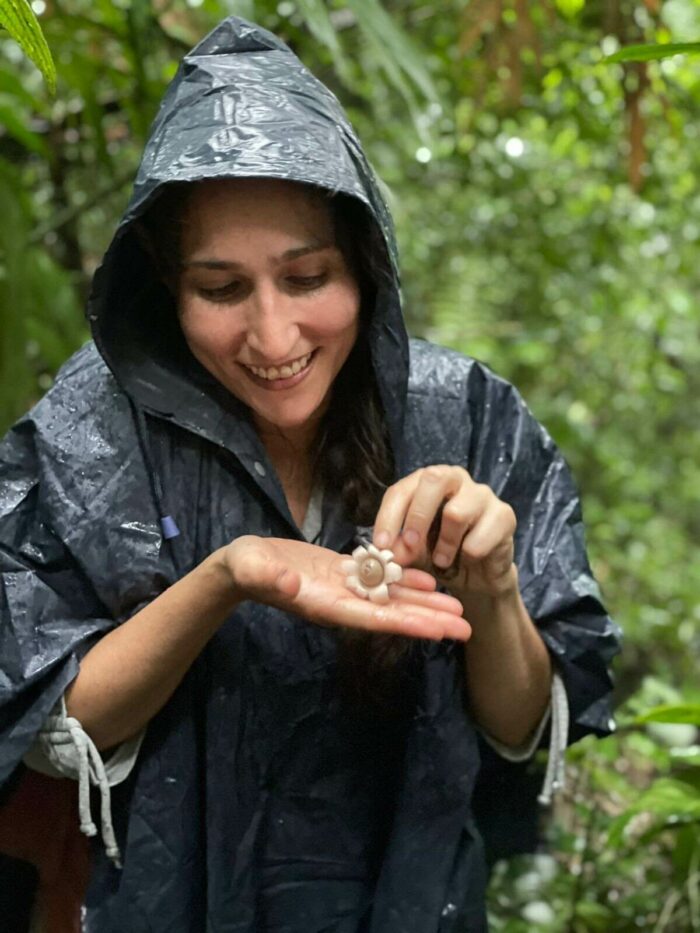