Intro to AlcheMycology: looking at fungi through the lens of traditional Alchemy⚗

Alchemy is the art of transmutation, rooted in a traditional practice that reaches as far back as ancient Egypt. While plants, minerals, metals and animals were recognized in the alchemical philosophy and practice in the form of creating effective medicines, mushrooms and much of the fungal queendom were all but omitted. Fungi are nature’s own alchemistas (little alchemists) turning the treasures locked within the earth into medicine for plants, animals, and people. In this introductory course we will explore fungi through the lens and philosophy of traditional alchemy to understand their role in the environment and how to work with them to produce potent medicinal allies.

What you will learn.🌈 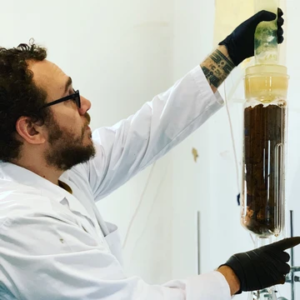 Jason Scott is a Mycologist, Ethnobotanist and Spagyricist who has studied traditional Hermetic Alchemy, from history and philosophy to practice, for the past decade.

He has a background in Ethnobotany and Plant Medicine that started on the Big Island of Hawaii, and has carried back with him into his home: the Pacific Northwest.

Born and raised in Oregon, Jason has an intrinsic interest in the Fungal Queendom and all of its aspects: from cultivation and mycoremediation, to historical and cultural relationships. Jason has studied various different healing modalities including Ayurveda in Nepal and Western Herbalism all over Oregon and Washington. He is on an ever-deepening journey of education to understand the practical applications of his interests, and the golden threads that connect them.

Jason has been published on the topic of AlcheMycology, exploring fungi through traditional Alchemy in Radical Mycology by Peter McCoy and Verdant Gnosis Volume 3, compiled by Jenn Zahrt, Catamara Rosarium, and Marcus McCoy. He has taught through these topics all over the United States. He is the Founder and Owner of Feral Fungi where he produces Mushroom Spagyric Tinctures, and curator of AlcheMycology.com where he shares some of his teachings and writings along side other fascinating discoveries in the world of Fungi. Jason is also a co-organizer of the Radical Mycology Convergence and the Fungi Film Fest.