Reishi Mushroom: Everything You Need to Know

Reishi is the common, nonscientific name used to describe multiple different species of a mushroom under the genus Ganoderma. The most famous species of Reishi mushroom is probably Ganoderma Lucidum, Ganoderma representing the mushroom’s genus and Lucidum representing the species.
Scientific naming aside, Reishi is a hard, conky, wood/leather-like saprophytic mushroom that grows from dead tree material. It can be found in the wild all over the world. Its most defining feature is its shining skin. In fact, that’s what Ganoderma means: Gano (shining) Derma (skin).
Reishi are some of the most beautiful mushrooms out there, with some species commonly growing in amazing patterns akin to the Golden Ratio. Other notable Reishi species include Ganoderma applanatum, Ganoderma curtisii, Ganoderma multipileum, Ganoderma oregonense, Ganoderma sessile, and Ganoderma tsugae.

The first written document mentioning Reishi came in the era of the first emperor of China, Shih-huang (Qin Shi Huang) of the Ch’in (Qin dynasty) Dynasty (221-210 B.C.)[i]
The Reishi mushroom, known in China as lingzhi, has been one of the most sought-after mushrooms throughout Chinese history, with Chinese texts recording medicinal uses of lingzhi for more than 2,000 years. Because of the mushroom’s remote habitat and scarcity of high-quality specimens, the use of Reishi for health purposes was reserved for the Imperial family for much of its history in China.

In fact, many of the early emperors of unified China were so obsessed with finding the elixir of eternal life that they sent out whole armies looking for Reishi and other potential ingredients to make this mythical drink.

In Chinese art, the Reishi symbolizes great health and longevity and is traditionally associated with luck, royalty, health and recovery, longevity, sexual prowess, wisdom, and happiness.

The Mushroom of Immortality

Reishi’s reputation as a highly medicinal mushroom has led to it being colloquially known as the Mushroom of Immortality, 10,000-Year Mushroom, Mushroom of Eternal life, and God’s Herb, among many other names.

Reishi is packed with powerful medicinal compounds, including more than 200 polysaccharides, over 150 triterpenes, and significant amounts of the amino acids alanine, leucine, aspartic acid, and glutamic acid. Ganoderic acids, a terpenoid, are unique to mushrooms in the genus Ganoderma and have been found in Reishi mushrooms. These acids have been shown to have many health benefits for the human body. 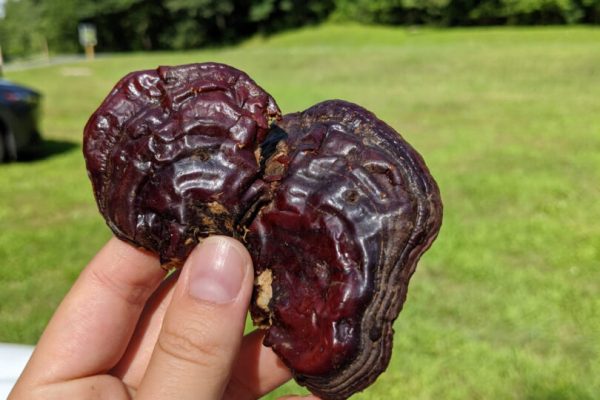 Reishi has been used to fight cancer, viral and bacterial infections, cardiovascular diseases (including high cholesterol and blood pressure), diabetes, slow aging, act as an antihistamine, and improve general well-being. It’s one of the most well researched mushrooms and with over 500 unique compounds known as Ganoderic acids, modern science is proving what the Chinese already knew for thousands of years. It’s worth noting that these benefits are from compounds found in the mushroom fruiting body. Science is only beginning to grasp the potential health benefits of consuming Reishi spores, which is especially popular in China! Some studies on spore extracts like this study from China demonstrated a decrease in cancer-related fatigue.

Reishi grows all over the world and is a great mushroom for any beginner forager. Its features are bright and unique and as far as we know, doesn’t have a poisonous look-a-like. Most species of Reishi have a shiny red body with a white underside populated by thousands of tiny, spore releasing pores.

Besides its shiny surface and white bottom, one of its most defining features is its taste. Simply scrape your finger on the underside of the fruiting body and lick your finger. If it has that classic potent bitter taste you experience in Reishi tea or extracts, you know Reishi has found you.

Reishi will always grow from dead and dying trees. Once the mycelium has colonized a tree, it will produce mushrooms every year until the nutrients requisite for its survival are completely consumed.

The first people to cultivate Reishi were the Japanese in 1970, making Reishi available not only to elites but to everyone else! In 2000, China alone produced around 13,000 tons of Reishi fruit bodies! Three years later, that figure rose to 49,000 tons. Since then, production has only increased.

But you don’t need to depend on China for your Reishi medicine. You can grow it outside on logs with myceliated plugs. Check out this video from Tony at Freshcap Mushroom to see how to grow Reishi on logs outside.

Or you can grow them inside with a Reishi growkit. In our opinion, this is by far the easiest method out there! Growing your own Reishi from scratch is definitely the most fun, but can be quite challenging. You need a pressure cooker, clean Reishi mycelium, mushroom grow bags, and a space for sterile inoculations. This can be as easy as a plastic box with holes in them, known as a still air box. We’ve also seen people have success growing Reishi in a box with pasteurized substrate!

Did we lose you there? Well, if you’re interested in a ridiculously thorough beginners course on the fundamentals of mushroom cultivation, sign up for our Sacred Mushroom Cultivation course right here! You’ll leave the course with the knowledge and skills to grow practically any kind of gourmet, medicinal, or scared mushroom out there! 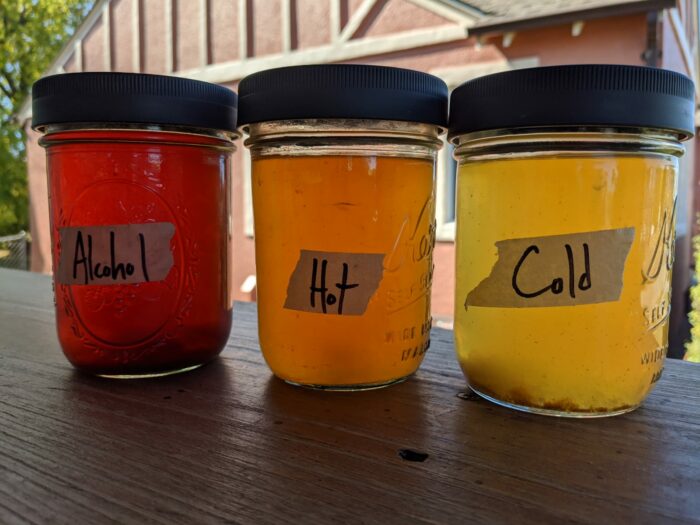 Reishi mushroom fruiting bodies are the most studied, meaning that most of the health benefits attributed to Reishi are derived from compounds found within the fruiting body. Yet these benefits aren’t accessed without a little effort post-grow or forage. Reishi mushroom is composed of chitin, a polysaccharide also found in the exoskeleton of insects. In the case of Reishi mushrooms, chitin acts like a safe, guarding all the beneficial compounds inside and locking it away from easy human consumption. But there are a few simple ways to crack the safe. The most prized possession in Reishi mushrooms are the ganoderic acids we talked about earlier. These ganoderic acids are not water soluble, so the most common way to extract them is through an alcohol extraction. In short, you just pour some high-alcohol content booze over your mushrooms (anything over 40% ABV works, the higher content the better) and then wait for at least 6 weeks. Generally, to get the most medicine out of your Reishi mushrooms, the alcohol extraction is followed by a hot water extraction. In this step of the process, you simply simmer the mushroom mass in water for a couple hours after draining away the alcohol extract product. When you’re done, mix the two liquids and voila, you now have a polysaccharide and triterpene powerhouse tincture with nearly a complete spectrum of the beneficial compounds found in Reishi mushrooms. Word to the wise: If you’re looking to buy Reishi mushroom supplements, always make sure it’s extracted and possesses a high content of beta-d-glutans and Ganoderic Acids.